We are happy to announce the Special issue of 2022 related to access to justice amid war in Ukraine has been published!

In this issue, we have collected articles and notes written by authors on various topics related to the war in Ukraine.

Among the research articles, we have a few contributions on the most requested issues. Our authors studied topical questions and tried to find solutions where they found a lack of proper regulations, gaps, and insufficient information on the reality of the war in Ukraine, using the experience of other war conflicts, modern doctrines, and approaches to argue for their conclusions and recommendations.

I would like to express my endless thank to my colleagues, scholars from Ukraine who are working amid the war on topics that are important for all – for the protection of human rights and to develop Ukrainian law and mechanisms for its implementation. I thank all our international authors for their valuable contributions to this discussion.
I truly believe that all the conclusions will be useful for further reforms and the main goal – to help prevent war and minimise losses in ongoing conflicts.

Enjoy reading and we welcome you to comment and review!

PRISONERS OF WAR: SPECIAL STATUS IN THE CRIMINAL PROCEEDINGS OF UKRAINE AND THE RIGHT TO EXCHANGE

This article is devoted to the relevant issue of the creation of appropriate normative regulation of criminal prosecution of prisoners of war who were captured during the armed conflict in Ukraine and their exchange.

Using the example of the first sentence in Ukraine to a Russian prisoner of war and relying on the norms of international humanitarian and national law, the author illustrate the specifics of the criminal liability of combatants. Evaluating the procedure of exchange of prisoners of war and criminal proceedings in absentia which were positively introduced in the legislation of Ukraine, it was concluded that the exchange is not an act of forgiveness, but an opportunity to return Ukrainian citizens, which is of the utmost importance in the hierarchy of values for the state.

This article asserts that Russian MALOPs provided a near-certain indication of attack in the months leading up to Russia’s total invasion of Ukraine. Furthermore, this research suggests that MALOPs are a principal tool for revisionist states like the Russian Federation and the People’s Republic of China to pursue legal asymmetries in pursuit of geopolitical objectives. Finally, this research recommends a novel approach for responding to this behaviour in the form of the Counter-MALOPs Toolkit: Identify; Disrupt; and Defend.

EVIDENCE IN THE INTERNATIONAL CRIMINAL COURT – THE ROLE OF FORENSIC EXPERTS: THE UKRAINIAN CONTEXT

Ukraine faced unprecedented challenges for to the national justice system and the possibility of using international justice to bring the Russian Federation military, officers,and officials to justice after the full-scale invasion of Ukraine by the Russian Federation on 24 February 24, 2022. Since In March 2022, the ICC Prosecutor has started an investigation of into war crimes in Ukraine. In addition, joint investigative groups are carrying out activities. Cooperation between pre-trial investigation bodies of Ukraine through the Prosecutor General of Ukraine with and the International Criminal Court has been established. Therefore, the research of into possible problems in the criminal procedure of prosecution for war crimes is one of the priority areas for Ukrainian law enforcement practice and legal science.

PROTECTION OF THE RIGHT TO HEALTH DURING THE PERIOD OF ARMED CONFLICT: THE EXPERIENCE OF UKRAINE

This article deals with the protection of the right of the civilian population and medical workers to health. The issue of rights violations arises in connection with the armed conflict between the Russian Federation and Ukraine, which has been ongoing since 2014. On 24 February 2022, its second phase began, which has been characterised by a large-scale offensive by the Russian army. The hostilities are still ongoing, and some areas are temporarily occupied. The aim of the present paper is to reveal the essence of the main international legal, and national means of protecting the right to health in a period of armed conflict.

THE RESPONSIBILITY FOR ENVIRONMENTAL DAMAGES DURING ARMED CONFLICTS: THE CASE OF THE WAR BETWEEN RUSSIA AND UKRAINE

There is no war without catastrophic impacts, not only on humans and states but also on the environment and nature. As with all wars, the question is raised as to whether an invasion or aggression is legitimate according to international law. This research aims to discuss an emerging issue at the international level, which is the responsibility of the aggressor state for the environmental damages incurred by the victim state. This paper discusses the possibility of establishing Russia’s responsibility for the environmental damages incurred in Ukraine. It will also shed light on the possible ways Ukraine may raise Russia’s responsibility, internationally speaking.

SEXUAL VIOLENCE AGAINST WOMEN DURING ARMED CONFLICTS: RUSSIAN AGGRESSION AGAINST UKRAINE AS AN EXAMPLE

Sexual violence is a significant issue that violates human rights and is a source of increasing concern for women during international and local armed conflicts. It has widespread impacts on civilian communities and on women in particular, with grave and long-lasting health, psychological, and social impacts. The scarcity of judicial trials and prosecutions against perpetrators of this violence is considered to be a driving force behind these crimes.

UNAMENDABLE PROVISIONS OF THE CONSTITUTION AND THE TERRITORIAL INTEGRITY OF UKRAINE

The paper analysed the legal consequences of violation of territorial integrity, concluding that military aggression, occupation and unacknowledged annexation of part of Ukrainian territory by Russia is not a reason to refuse territorial integrity as an unamendable provision of the Constitution of Ukraine. On the contrary, the protection of this provision should be strengthened.

The armed aggression against Ukraine has been started in 2014 when Crimea and part of Ukrainian territory were occupied. It led to the disappearance of number of people and the new notion of missing persons amid military conflict appeared in the legislation of Ukraine. This study aimed to discover the gaps that prevent the full protection of the rights of missing persons and to optimize the activities of the authorities to protect this category of persons, based on the national legislation and case law.

WORKING IN WAR: THE MAIN CHANGES IN LABOUR RELATIONS AND WORKING CONDITIONS UNDER MARTIAL LAW IN UKRAINE

Maintaining labour regulations and the quality of working conditions is a considerable challenge during wartime and martial law. This paper outlines the changes that have affected the working life of employees who continued in employment, both inside and outside Ukraine, under martial law in 2022.

ADOPTION DURING THE WAR IN UKRAINE: HOW NOT TO LOSE A CHILD

During martial law, the protection of children’s rights is of the utmost importance. One key aspect is the realisation of the right to raise a child in the family, and one of the ways this can be exercised is through adoption. However, martial law adoption has many nuances and pitfalls that require careful research.

In this article, the author carried out a comprehensive study of both the changes in the legislation of Ukraine in terms of adoption in the context of martial law and the alternatives that can be applied to adoption during wartime.

DEATH PENALTY IN SO-CALLED DONETSK AND LUHANSK PEOPLES REPUBLICS: ARBITRARY EXCESSES OF PRO-RUSSIAN REBELS OR ‘BACK TO THE SOURCES’?

In Ukraine, we are very aware of what fake justice means – the history of the Soviet occupation has taught us lessons. In this incredible article, co-authors were so brave to raise issues of so-called ‘collective courts’, which were held for propaganda purposes, where ‘saboteurs’, marauders, and rapists were sentenced by show of hands. The authors raise the issue of formal ‘justification’ and direct practice of the death penalty in certain areas of the Donetsk and Luhansk regions of Ukraine affected by the uprising and subjected to Russian aggression.

THE RECOVERY OF UKRAINE IN THE FIELD OF JUSTICE: CHALLENGES AND PRIORITY GOALS

Currently in Ukraine, a significant objective is to promote the construction of a peaceable and open society, ensuring access to justice for all. Such a system must be effective, accountable, and based on the broad participation of institutions at all levels. This article highlights some of the priority steps in the recovery of the justice system in Ukraine.

MEDIATION IN POST-WAR RESTORATION IN UKRAINE

This article addresses the challenges of developing mediation in Ukraine, the lack of effective coordination between courts and mediators, and issues of low awareness in Ukrainian society about mediation.

Our previous issue is available here 4/2022

The whole our archive is here All Issues

More contributions may be found here: Our new gateway Access to Justice Amid War 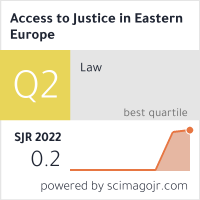 We publish a wide range of article types related to access to justice and legal science, on a base of peer review and with no editorial biases.

with overview of current judgments important for law enforcement;

Our Most Popular Articles

Why Europe Should Reconsider its Anti-Arbitration Policy in Investment Disputes

To keep in touch with us, please,
complete the registration form and get our latest news

To get the print issue of AJEE,
please, contact our publishing house Dakor